Next week I’ll be performing in an adaptation of Ibsen’s fantastical poem-play, Peer Gynt, as part of the Duct Tape & A Dream New Works Festival.  Here are the deets:

What?
A triple bill! consisting of:
? 12 Things I Learned in my 20s
Written by Alex Beck, Directed by Leicester Landon
? Colorless Green Ideas Sleep Furiously
Written and Directed by Lauren Rayner
? Pe(t)er Gynt
Adapted and Directed by Victoria Crutchfield

Tickets?
Tickets ($18) can be purchased in advanced through SmartTix or at the door. 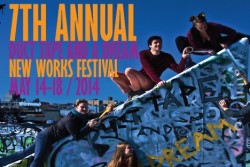